Low functioning autism is a form of autism at the most severe end of the spectrum. Individuals who have it often have extensive impairments. This form of autism can affect both children and adults.

Low functioning, rather than high functioning autism, is a form in which people have little awareness of those around them. Individuals can have multiple impairments in virtually all areas of development. Children who have this form of autism display it differently from those at the other end of the spectrum.

What is unfortunate is most autism research done today focuses on high functioning autism. Because of this, doctors do not have as much information or as many treatment options available to children at the opposite end of the spectrum. It is important to keep in mind that children labeled as low functioning autistic children can see improvements in their language. They can improve socially and may be able to move towards high functioning autism. This does not happen to all children, but no parent should lose hope that their child cannot see some improvement.

Autism has an incredible range in terms of the degree of the impairment. In high functioning autism, people are socially aware and they have good language skills. They may even appear to be relatively "normal" when they meet other people. In low functioning autism, people appear to be mentally handicapped and often are socially impaired. Often, one of the best ways to assess the level of autistic symptoms is to notice how well the person is able to function in daily living.

In evaluating the treatment options for someone with autism, doctors often use a scale. Classification based on IQ testing can help individuals to tailor their education and daily living requirements. IQ classification is not an exact science and often parents find that it does not provide enough understanding of the children themselves.

Children with low functioning autism often have a number of problems. 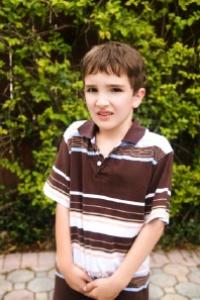 Those who believe their child is suffering from low functioning autism should not consider this a final sentence because there are opportunities for improvement in each of these areas. Many of these children can improve and reach higher levels.