Acupuncture treatment for autism spectrum disorder (ASD) is scarcely a new concept; according to the 2007 National Health Interview Survey, 150,000 children used acupuncture in 2006. Yet, after decades of trials, people are still unsure whether to consider it as part of therapy for a loved one who has autism.

Acupuncture is a group of procedures involving the stimulation of anatomical points. The best-known technique involves penetrating the skin with thin needles practitioners manipulate with their hands or by electrical stimulus.

Investigations into a range of acupuncture treatments for people with autism has shown varying degrees of success; the most widely used methods are shoninshin and scalp acupuncture.

Traditionally, acupuncture is rarely considered for children younger than six. However, according to Pacific College of Oriental Medicine, shoninshin, a pediatric form of acupuncture that uses special, non-penetrative tools to stimulate points, is useful for treating many conditions. It takes only 10 to 20 minutes to perform and enhances circulation and relaxation. It also helps respiratory and digestive problems, such as those associated with ASD. 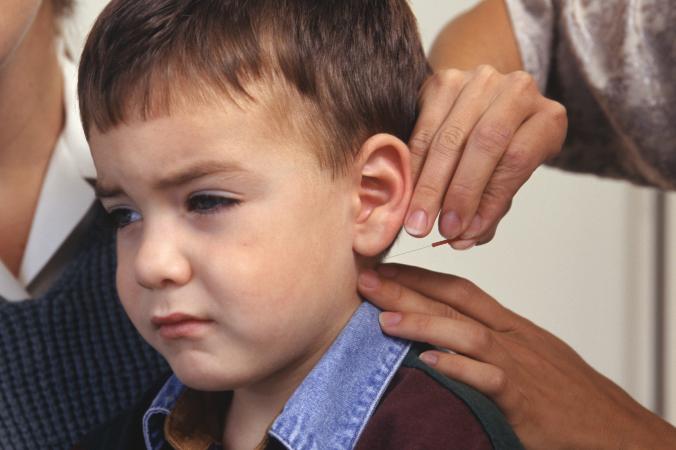 Synopsis of Scalp Acupuncture by Subhuti Dharmananda, Ph.D. and Edythe Vickers, N.D., L.Ac., Institute for Traditional Medicine, Portland, OR, describes how scalp acupuncture uses zones on the head that relate to specific body functions and regions.

Practitioners insert the needles into a thin layer of loose tissue beneath the scalp surface. They then subject the needles to rapid manipulation or electro-stimulation. Among the areas treated by this method are disorders of the central nervous system, anxiety neurosis, and other psychosomatic and brain conditions.

One reason it is thought suitable for people with ASD is because the patient cannot see the needles; this reduces their nervousness.

National Center for Complementary and Alternative Medicine maintains acupuncture has few complications if carried out properly. It cautions:

Treatment of any kids with acupuncture poses problems; these difficulties are exaggerated with autistic children. They may be:

Feasibility of Trials on Kids With Autism

In view of these problems, trials implementing acupuncture with children with ASD are concerned with the therapy's feasibility and how acceptable acupuncture is to patients and parents.

In one trial carried out in the UK in 2013, it was the approach to therapy that was of the utmost importance. The College of Integrated Chinese Medicine reported on measures taken to overcome feasibility issues in their study of acupuncture for the treatment of children with ASD.

The study's findings were that acupuncture is a viable therapy for kids with ASD. Out of all those involved, only two were uncomfortable with needling and so received moxibustion (where a moxa herbal stick is lit and held over acupuncture points) or massage and acupressure instead.

The method and conditions in which the treatment was undertaken anticipated and overcame problems magnified by autism in children. However, it is important to point out that the study had only 14 participants.

In September 2011 the Cochrane Organization published the findings of a variety of studies carried out in China, Hong Kong, and Egypt. These involved a total of 390 subjects aged between 3 and 18 years. The conditions used during and prior to treatment in these trials were not reported, but problems noted by parents show the children were afraid, crying, and that there was pain, bleeding, increased hyperactivity, and disturbed sleep. The conclusions stated evidence at that time did not support acupuncture therapy on kids with ASD.

The conflicting conclusions of both these reports indicate the practitioners' approaches were quite different. It appears the approach to using the technique might be the deciding factor in its usefulness.

Therapy outcomes are what make many parents choose to try them for their kids. No one wishes to put their child through a treatment if the success rate will be poor, especially if it may cause anxiety or discomfort.

Assessment is a major difficulty in deciding whether acupuncture treatments are successful.

In the UK trials, the College of Integrated Chinese Medicine reported parents completed initial questionnaires about their kids, and every three months they assessed social behavior improvements with the Bellini and Hopf 2007 Social Skills Profile. Simultaneously, teachers also completed the Pragmatic Profile as a measure of language development. The assessments were deemed insufficient and untrustworthy. The UK report stresses that the assessments try to standardize behavior that changes with different stimuli and contexts. Consequently, the ratings are subjective.

The indication is that results are varied and individual. Each parent will know to what extent the technique has worked for his or her child. Parents may notice only the smallest changes. For many parents of autistic children, knowing how slowly development occurs, these changes may be enough to justify acupuncture of some form.

Looking to The Future

All reports point out that more standardized research using greater numbers of subjects and with better assessment methods are needed. There are several factors to consider before beginning acupuncture therapy.

Keep the following in mind when considering acupuncture for kids with autism.

If you are willing to try acupuncture, it is important to use a qualified acupuncturist, preferably one who has previously worked with ASD children. National Center for Complementary and Alternative Medicine advises finding an acupuncturist through your medical practitioner. They recommend you check the practitioner's credentials, since requirements for obtaining a license differ from state to state, and that you use someone with conventional medical training.

Acupuncture May Help Your Child

It's a complex decision to make, but there may be aspects of your child's condition that can be aided by acupuncture; the too few research trials carried out in this field fail to give a full picture. There are difficulties in assessing the mainly subjective results with other ASD therapies. This may be a treatment to try with your child. As parent or caregiver, you are better aware of his individual condition and temperament; it is up to you to make an educated decision as to whether he is a suitable candidate for any of the family of acupuncture treatments available.