The consumption of camel's milk for health-related benefits has increased in the past few years. Although controversial, there are both anecdotal evidence and larger studies that show camel's milk can have some benefits for people who are experiencing symptoms of autism.

Although anecdotal evidence isn't always reliable, it can be a good starting point for further research. One parent's account of her son's experience with camel's milk was used as a reference for parents and providers to better understand alternative treatment methods, as well as the treatment process in general for those who have been diagnosed with autism spectrum disorder.

One Story of Improvement

This anecdotal evidence noted that drinking four ounces of camel's milk a day helped improve her son's behavior, skin problems, verbal abilities, eye contact and immunity. Prior to giving her son camel's milk, she consulted with her son's doctor and got a note signed approving him for the consumption of camel's milk.

The milk was shipped from Israel, unpasteurized and frozen, but was tested for bacteria prior to consumption. Her son drank the milk for a total of six years, and she noted that she noticed a difference in his behavior within a day. She also states that increasing the amount of milk and skipping consumption negatively impacted his behavior immediately.

In a double blind, randomized study of 60 children between the ages of two and 12 years old, a clinically significant improvement was observed in their autism spectrum disorder symptoms after they drank camel's milk for two weeks. The placebo group did not show a significant difference in relation to their symptoms. Symptoms were measured using the:

Like all dairy products, the relative safety of consuming milk from a camel depends on the treatment of the product. In a review of 472 nutritional records, researchers determined that camel's milk is very closely related to human mother's milk. It is low in sugar, high in minerals, and low in cholesterol. Based on their findings, they stated that camel milk is safe for children to consume. 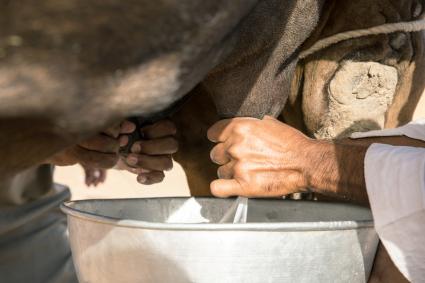 There have been several FDA (US Food and Drug Administration) related issues with camel's milk. Because it is not overly popular in the United States, there are limited places to purchase camel's milk here. The FDA has issued several warnings to farms like Hump-Back Dairys and Desert Farms for selling unpasteurized products and making claims on their sites that the milk can cure various diseases and conditions.

The FDA prohibits the sales of unpasteurized products unless they undergo a very specific aging process, according to the Code of Federal Regulations title 21. This regulation is intended to help prevent the spread of food-borne illnesses and animal based pathogens.

Although there may be some potential benefits to drinking camel's milk, it should in no way be used to replace professional care. Keep in mind that using unpasteurized and unregulated products increases your risk of contracting food-borne illnesses. If you would like to try camel's milk, be sure to purchase it only from a regulated, FDA approved company and consult with your doctor if you have any questions or concerns whatsoever.

1
Comments
© 2006-2020 LoveToKnow, Corp., except where otherwise noted. All Rights Reserved.
Resources, Advice & Tips for Covid-19
Read More
Can Camel's Milk Help Those With Autism or Is It Just a Fad?